ARQUITECTURA, ARTE, ENTREVISTAS
01 / 03 / 2018
When Ricardo Flores and Eva Prats were commissioned to restore the old peace and justice cooperative building, they couldn’t imagine how magical this place would become. Once, this was the Peace and Justice cooperative building, in Barcelona, but, it has since been reborn as an experimental theatre company. After a century of history, Barcelona-based studio Flores & Prats has now restored the building and given a new lease of life to Sala Beckett, adapting it for new theatrical uses.

Today, the Spanish practice has released a documentary series with 5 episodes, produced by 15-L. Films. "ESCALA 1:5” shows the renovation process and celebrates the emotional connection with this place and the people. The two architects spoke to us of their project and explained the main challenges during its creation.


How did this opportunity come about?

There was an open competition organized by the theatre company and the municipality. The company needed to change headquarters and asked the municipality to organize the competition in order to choose the architect for the new place. Sala Beckett has been working in Barcelona for more than 20 years and has a lot of prestige promoting new theatre venues so it was for all this work done that the municipality wanted them to keep working and offered them different places. Toni Casares, Sala Becketts director, was the person leading the whole process for this competition.

The competition consisted of an open call to practices that had some experience in rehabilitation with cultural programs. After the initial submission of portfolios, five teams were selected. They were asked to tackle the location of the Sala Beckett Drama Centre in the old Cooperative building, which had been abandoned. The building was not listed, so it could be demolished, and in fact, out of the five teams, two of them proposed demolishing it and building a new theatre. So deciding to keep the building and work with it even in such a decadent state, was already a design decision. 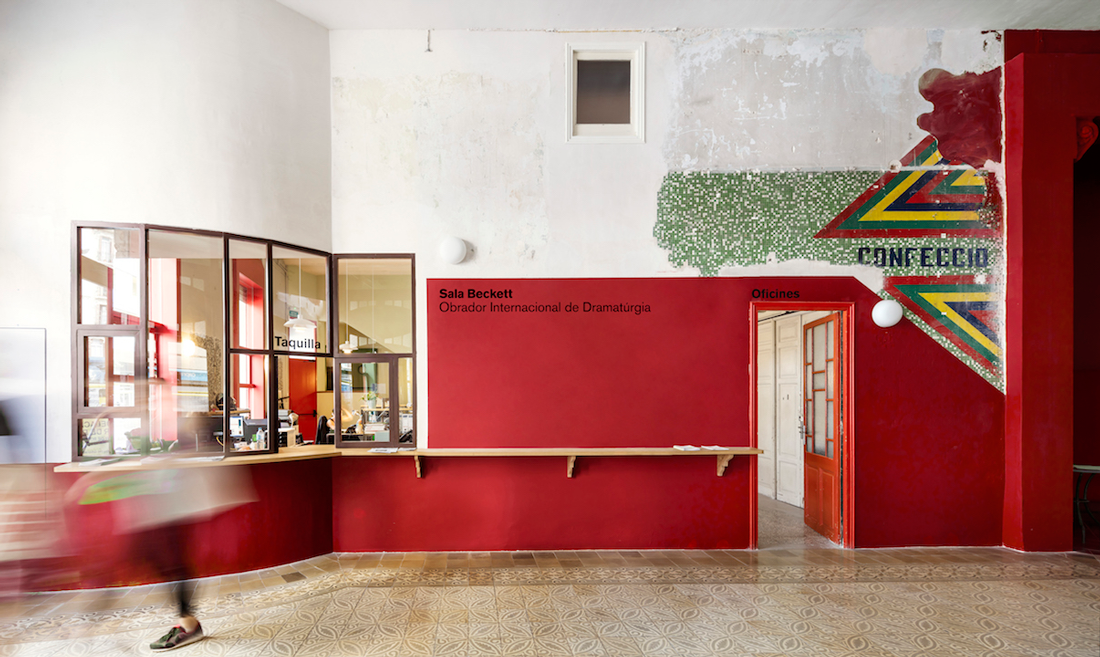 Why did you choose to document the whole process in video?

When we were at an already quite advanced stage in the construction of the new Sala Beckett, we realized it was such an intense process and we wanted somehow to record it, especially the end of the construction and the beginning of the new occupation. We thought that this change was a nice story to tell, so we called our friends filmmakers and producers from 15L-Films to organize this documentary project. They started to register what was going on there, and they continued to film everything through the end of the construction and until the opening of the new place. They proposed to conduct interviews, not only with ourselves, explaining the story behind the different aspects of the building, but also with several people from other disciplines, like artists, theatre makers, designers... which in a way share similar design concerns to the ones we were dealing with in Sala Beckett.


The five episodes of the series focus on the components of the building. Can each of those components in their own way tell a little bit of its story?

It is like starting a story through a detail and growing from it. The project has a lot to do with the observation of the elements we found there, so when the filmmakers proposed this organization, we thought it had a very strong relationship with the beginning of the project. In fact, the way we started understanding the building was when we recognized the volumes and the size of the rooms, but also when we start understanding different elements full of memories. Our design relies a lot on working with these different elements, so it makes sense in a way that through them one can start explaining the building. 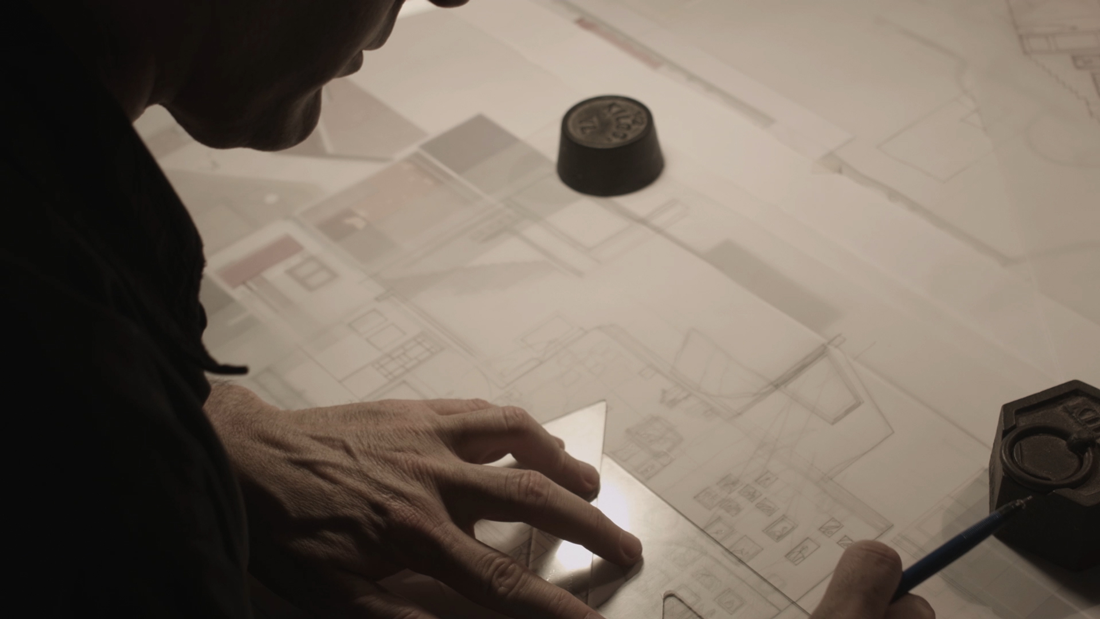 Considering that it is a theatrical building, with strong emotional ties to the people and the city, did this connection influence your work?

Yes, it influenced us completely from the very beginning, because we thought that the starting point was to keep the atmosphere and the memories that were charged already on the walls. We wanted to restore and to maintain the voices and stories of all the workers over time as far as possible, keeping this atmosphere even through the construction period. The effort was in bringing into the present all the decadence that had survived, so that it could participate in and contribute to the new beginning of this place.


How is that sense of community and theatricality reflected in the space?

We consider that the community starts in the neighborhood through the corner of the building. The neighbors can get to the bar that opens every day. This bar is closely connected in plan to the vestibule of the theatre. So when you go there, it's easy to get information on what's going on in the theatre and in the school, and also from the vestibule you can see the theatre people working, and you see that there is a second level which is a little more private, etc. One thing leads to another and it makes the community from the street mix with the community of the theatre very easily without even noticing. At the same time, the empty central atrium makes the community of the theatre feel united because they meet and they just bump into each other by chance, and this creates the feeling that you are in a place that belongs to a community and you can feel part of it, even when you are alone, you hear others’ voices and share other people’s perspectives. When you go out of the building, once again there is the bar. Everything begins and ends in the bar. 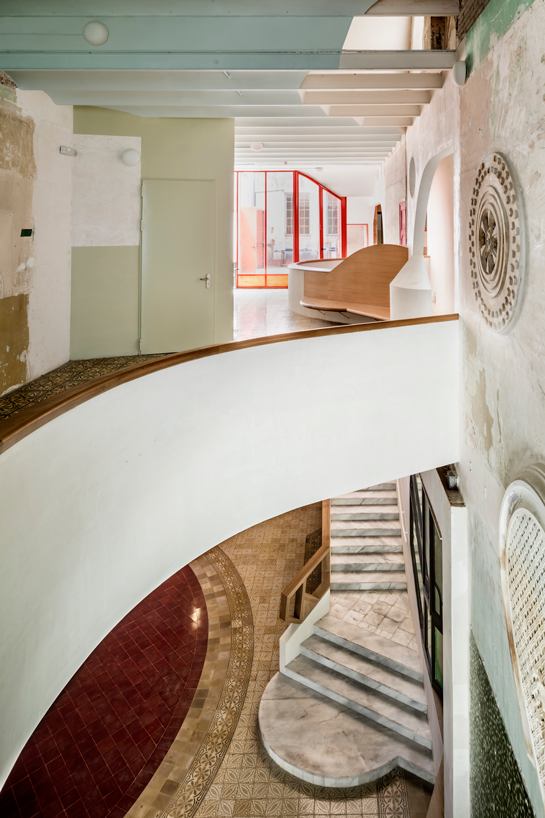 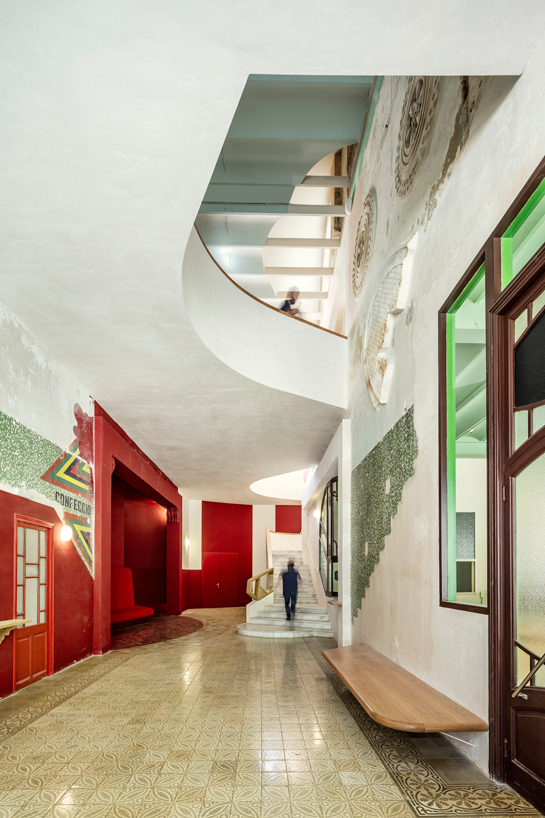 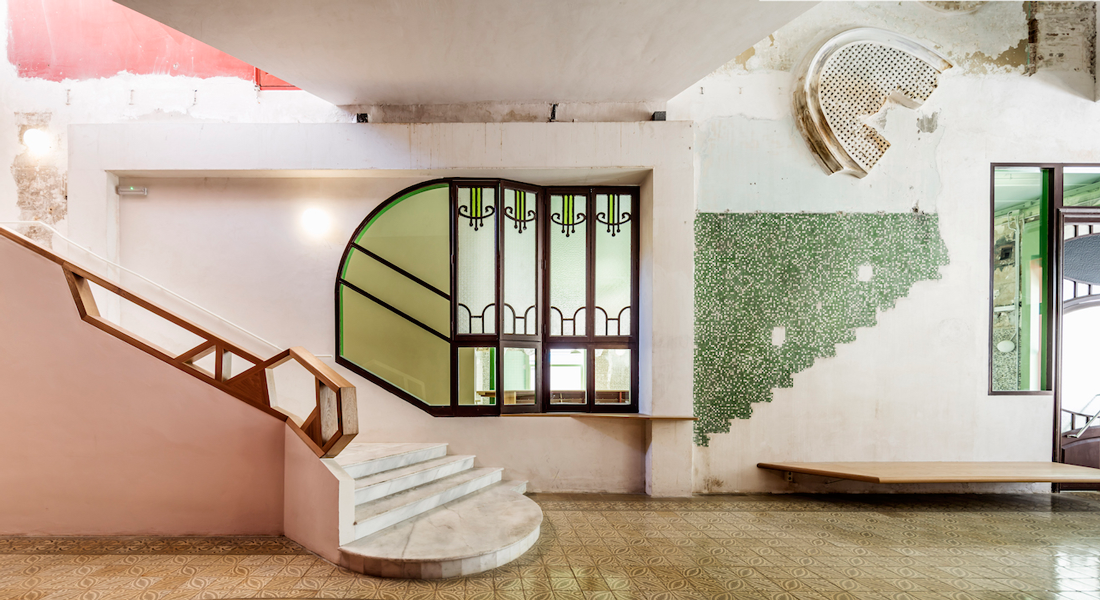 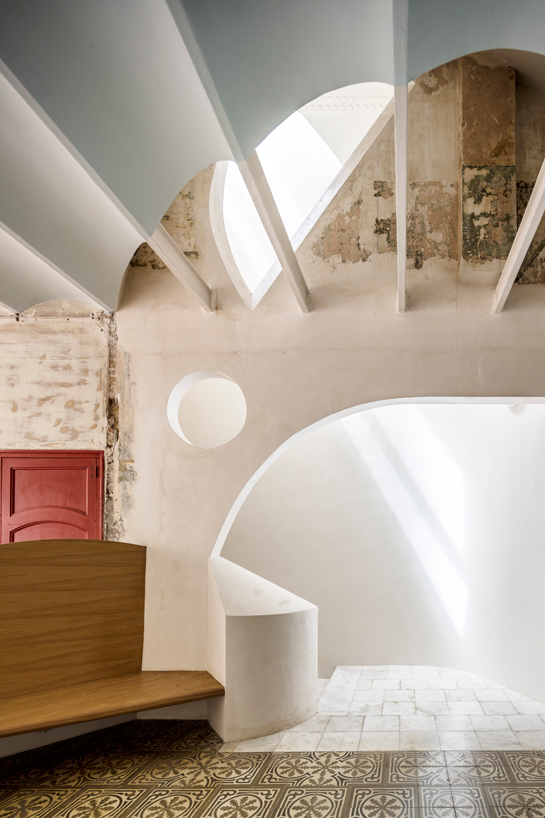 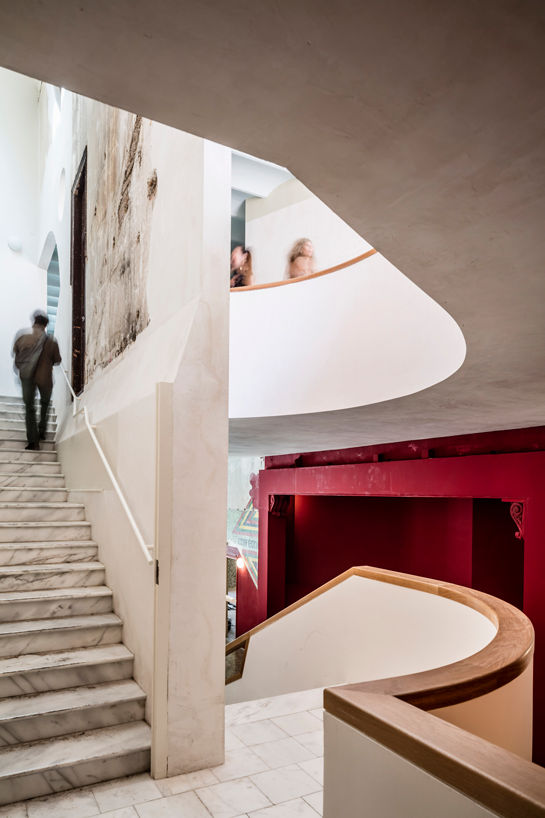 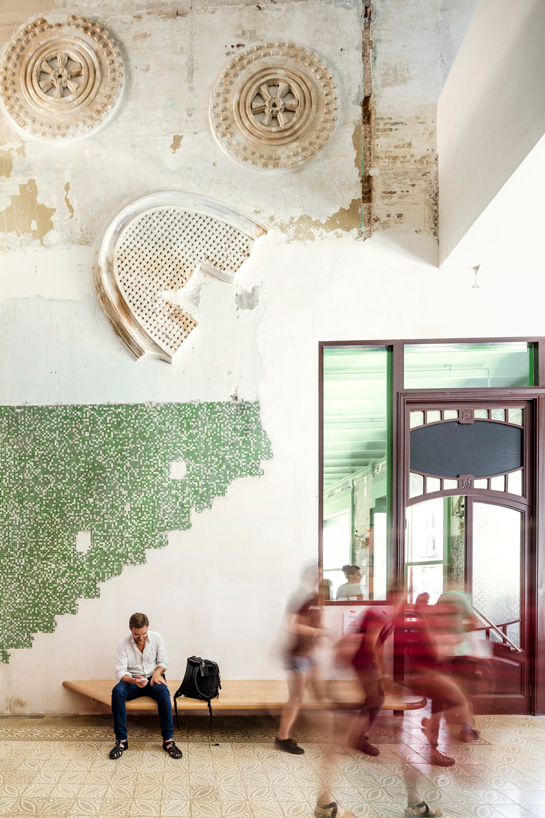 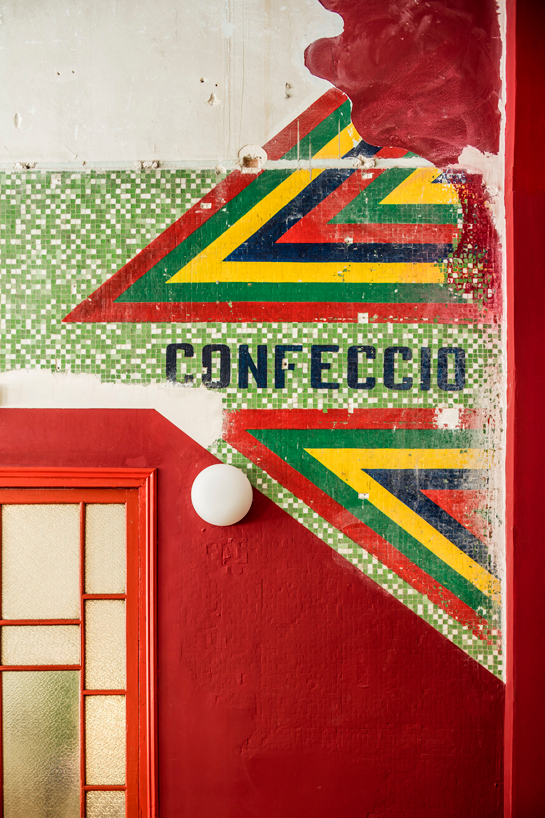 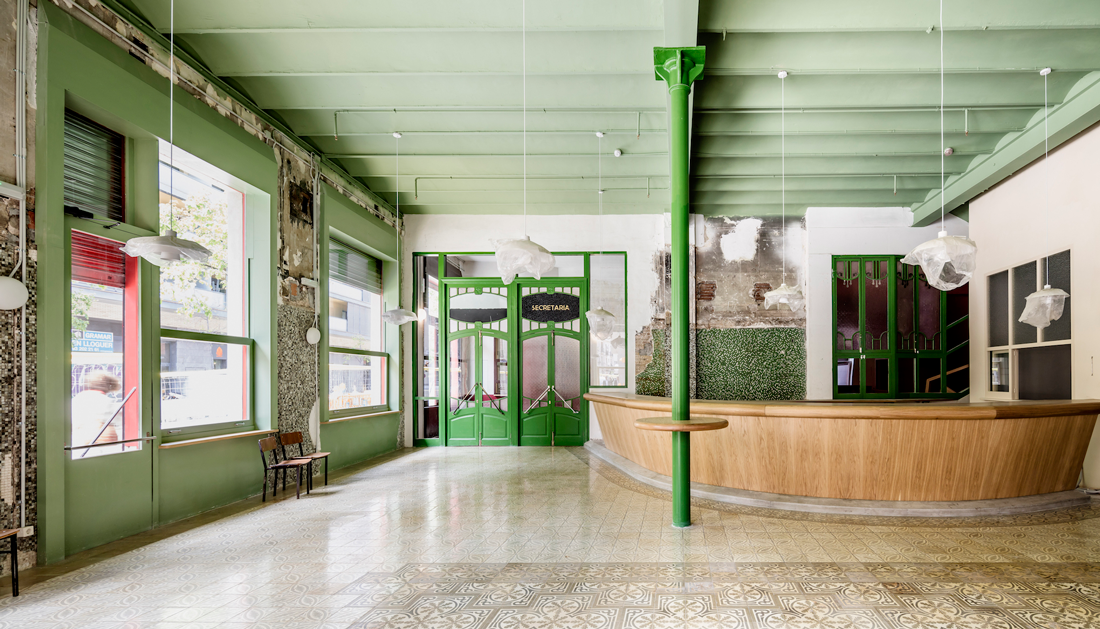 What was the most important aspect during the creative process?

The affinity we had with the director of Sala Beckett, which made the whole process work with a lot of freedom, giving us a lot of clues as to how he wanted the building to be. We realize that theatre people work in the same way our studio does, in a very artisanal way, questioning a lot and testing a lot, and by experimenting we arrive at things we weren’t aware of at the very beginning. So having a very good client was the key to such a successful result.

When you create a public building you are thinking about many different users in order to understand it and welcome different kinds of people with different backgrounds, different generations. It's more open and it's relied on by the society around it. In a private one, we have to deal with a more restricted situation, with the personality of a family or someone specific, and such projects are more directed towards a one-to-one relationship. We think it's much more interesting working on a building that could belong to the city and which could be used by a whole range of people, with different stories and backgrounds. 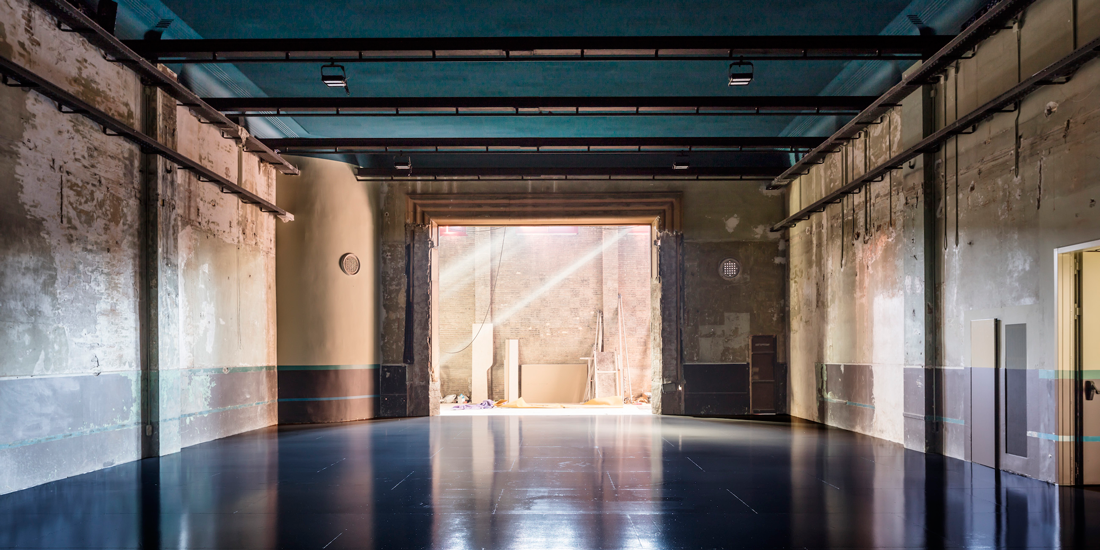